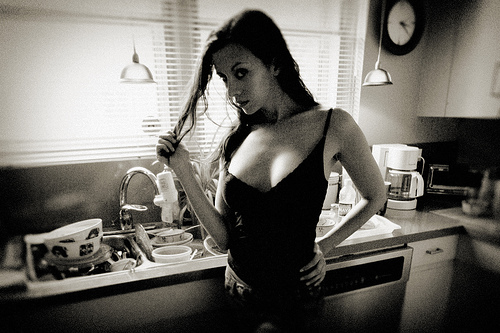 Something I touched on BIG TIME in my LMR Series part V, is the idea of initiating some kind of sexual dialogue with a girl you’re interested in. This creates a spike in her buying temperature, e.g. how much of  a “desirous” mood she’s in and how sexually complicit she is to you 😉

If you are planning on SNLing a particular girl, or simply increasing your probability of doing so.. you need to do this.  Same as when I say you can’t wait till the end of the night and all of a sudden try to pull her, i.e. you need to have been leading her [around] beforehand; you cannot try to wait till the last second to all of a sudden make the encounter a sexual one.  Understand the only reason why you’d attempt to delay it indefinitely is because you’re scared to, in which case you have no business having sex with a girl anyways ; P.  Or you simply don’t know, or know how to.  It’s time to be made aware of this stage of logistics..

Girls are social creatures.   Put in terms easier to understand.. they respond to their environment.  It’s up to you to determine what that is.

Lots of guys have genuine conversations with girls; the girls are engaged- going back and forth with them- comfortable and having fun.  That’s all fine and dandy.. but if you don’t shape it and lead the conversation in a particular direction, girls will have NO problem letting the conversation go absolutely nowhere.  Not their fault, and not something you can blame them for.  It’s just not their role sunshine.

Now when you do initiate this direction of thought in her head, it forces her to subconsciously consider the possibility- and at this point she’ll tell you what’s going on, i.e. her objections and/or logistical constraints.  From here you can figure out how the fuck you’re going to handle it.  Maybe you need to make her more comfortable with you.. maybe she needs to be turned on more, maybe you need to demonstrate leadership capabilities, or she’s got friends you’ve got to figure out how to help her deal with.   Or maybe you’re wasting your time and you need to move the fuck on.  Regardless, you now have a much clearer picture of what’s going on on her end.

It’s also a HUGE hook.  I’ve created a sexual connection with girls on first meeting them that ended up being a sexual encounter several weeks later.  We weren’t able to work something out that night, but weeks later we were still sniffing around texting each other and were able to meet up weeks later and get it on.

So what do you say?  Remember it needs to be congruent.. to you and the situation you’re in with the girl.  And it also needs to be about you and her.  You can make as many sexual “jokes” as you want to- but if you don’t connect the dots in her mind and make it about you and her, she can go on ALL night like this without developing any sexual feelings for you.  And then flit off into the night without a second look back at you!

My point is this, YOU must control/influence her buying temperature. Whether you are subtle or blatant.  Strong sexual intent, or playing hard to get, it’s going to depend mostly on how you feel, because the connection you have with her will be a reflection of this and she’ll be experiencing the same feelings you are.

In LMR Series part V I gave a few different examples, “I just caught a glimpse of what you look like when you’re having an orgasm”, “I’m going to do things to you”,  and  “I want to eat your pussy”.  These are all field-tested examples, and demonstrate increasing levels of sexual tension.

There’s a million ways to express a sexual purpose, depending on where you’re at with a girl.  Remember- you cannot be talking baseball stats and all of a sudden tell a girl you want to eat her pussy.  This is incongruent, and quite simply a lie, she’ll know you’re not feeling this if you’re having a platonic conversation with her- so make sure to be touching on topics that are more and more intimate.

Unless.. you’re talking about slamming homeruns and sliding hard into homebase ;).  Remember you can direct the vibe of a conversation with your tonality.  You can make even the most innocent of conversations very sexual with vocal tonality.