Brian and I do an audio breakdown of how to get laid in Vegas.  We tell the story of how we pulled two girls together from XS nightclub in Vegas back to my apartment. We banged both of them and give a very detailed breakdown of how we did it.

Both girls were visiting from New York City, didn’t know each other very well as it was work-related, and decided to head out to Xs nightclub together. Little did they know what the night had in store for them! One of the most interesting components to this lay report was the complete ROLE-REVERSAL Brian and I had in winging each other. Whereas I am typically more “hard-hitting” and aggressive, whether sexually, physically, or just in the way I’m expressing myself, my girl this time around was rather subdued and meek. I would not have been able to be too brazen with this girl! In fact my sexual escalation with her was rather “lovey dovey”.

Brian’s interaction with his girl was just the opposite! Whereas Brian is the one that’s usually more “romantic” with women, treating them gently and showcasing his “protector of women” vibe and understanding of them, his girl was a pain in the ass and needed strong handling skills from Brian! Ha!! She was constantly complaining and bickering and giving Brian shit test after shit test.

What’s also interesting is that we both separately convinced our girls to leave with us.. in dramatically different fashion! I told my girl, “I’m going to take you back to my place, you’re going to make me a sandwich, then I’m going to make sweet love to you.” To which she shyly and coyly answered, “Um.. I don’t know about that 🙂”

Here’s a shot taken from just about where we were standing in the club when we met them: 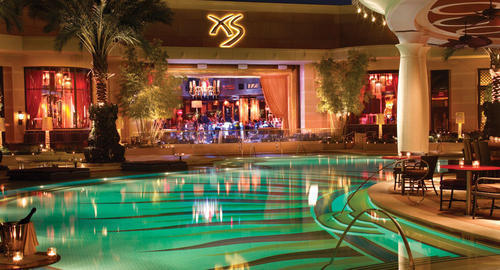 get laid in Vegas with Manwhore as your wing!

Feel free to leave comments we appreciate them and will answer questions!